IS Risk Analytics' View From the Desk - August 2021 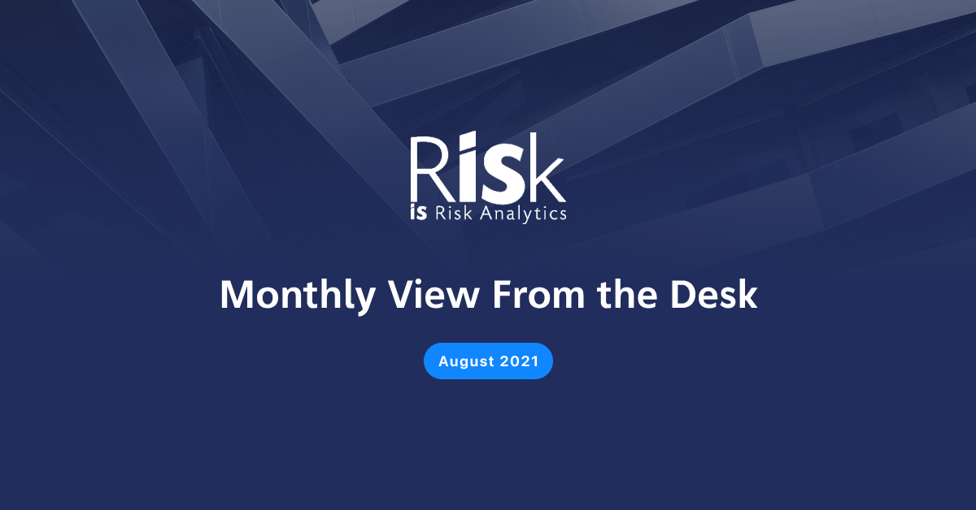 August started out with a bang on the 6th and 9th following the non-farm payroll report and a subsequent drop in gold. After this burst in volatility, August slowed down substantially. Volatility in equities has continued to trend down as the major market indices continue to mint new all-time highs.

Economic indicators out of China are beginning to show that the country’s recovery has begun to stall. Manufacturing and service industry figures from August showed near flat growth to even contraction in some sectors. The decline is largely the result of restrictions put in place by the government following an outbreak of the Delta Covid variant in the country as well as global supply chain issues.

Eurozone inflation rose of 3% in August in comparison to one year ago according to preliminary estimates. The figure was above expert predictions and the highest reading in 10 years. The rise was primary attributable to energy and food prices. Most economists believe the inflation rise will be temporary, but it remains to be seen if and how the ECB will address the issue when it meets in early September.

The US House of Representatives continues to work on passing a $3.5 trillion spending package as well as the $1 trillion infrastructure bill that has already passed the Senate. House leaders hope to have the larger bill passed by the end of the month, though a large number of details still need to be finalized leading many analysts to project if it does pass, it will be later in the year.