Global investors brace for U.S. election volatility as votes pour in across America with more than 100m ballets casted early, breaking previous records. Coming into election day, Democrats had hoped for a blue wave, especially across battleground states like Florida, Pennsylvania, Ohio and Texas. With confidence, Wall Street rallied higher by the end of Tuesday’s session with the Dow Jones leading the pack at 2%. Likewise, European indices closed at weekly highs after having one of their best days since June as Biden win is seen to improve trade ties between U.S. and Europe. STOXX initially gapped 0.9% higher before finishing the day up by 2.8%.

During Asia thus far, votes have shown a more traditional distribution of favourability between candidate Joe Biden and President Donald Trump. Other than Arizona, the incumbent holds a comfortable lead in hotly contest key states surprisingly in an electoral college race now considered too close to call. Global broad-based benchmarks have swung wildly between positive and negative territory with Australia and Japan relatively unchanged from Tuesday’s close. Meanwhile, despite Chinese authorities putting the brakes on Ant Group’s IPO scheduled on November 5th, Hong Kong still managed to etch out some gains. Among overnight futures, Nasdaq outperforms as much as 4.4% before settling 2.5% higher. 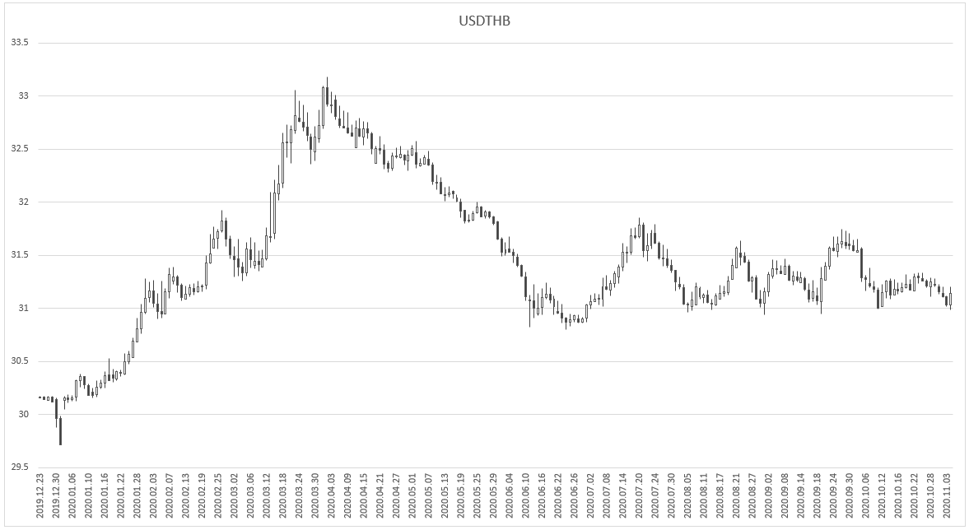 With results unclear, similar price action whipsaws across all major FX pairs. Though one overarching theme overshadowing FX market is the demand for the American greenback as the U.S. dollar index regains lost ground from yesterday. The Mexican peso saw a spike to just shy of the 22.0000 level, while the Russian ruble reversed recent loss settling below 80.0000. Amid political turmoil of their own, the Thai baht bounces off the 31.0000 for the 6th time in 4 months. On-going unrest in Thailand, saw a rare public comment by the Thai King, addressing a need to compromise.

Elsewhere, a surprisingly lack of volatility in gold see’s the precious metals post only a $35 intra-day range. Crude higher by 70 cents, whilst Bitcoin briefly touches 14,000 for the first time since 2017.