Asia is off to a mute start as investors mulled whether taking on weekend volatility outweighed risk if U.S. stimulus talks were to derail over Saturday and Sunday. Following Trump personally torpedoing congressional relief negotiations, the President’s subsequent backflip fuelled a 2-day rally across global indices. By the end of yesterdays session, Wall Street closed at monthly highs with the S&P500 leading the charge. Likewise, European indices hit a 3-week high despite Brexit risk and newly imposed Iranian bank sanctions protruding into investor mood.

With talks resuming between House Speaker Pelosi and Treasury Secretary Mnuchin, the U.S. dollar edged lower against a basket of major currencies. Though Pelosi has rejected a stand-alone airline bailout, her party has revised down their proposal to $2.2tn (from $2.4tn). Also. as election odds blow out in favour of Joe Biden, investors are seeing an increasing likelihood of stimulus if Democrats won the presidency. Of exotic currencies, China’s yuan rallied 0.5% on open today after a week-long Chinese holiday. A resurgence in COVID-19 cases have set back Thailand’s plan to reopen for tourism. As a result, alongside continuing anti-government protest the Thai baht continues to under perform among Asian currencies against the greenback. 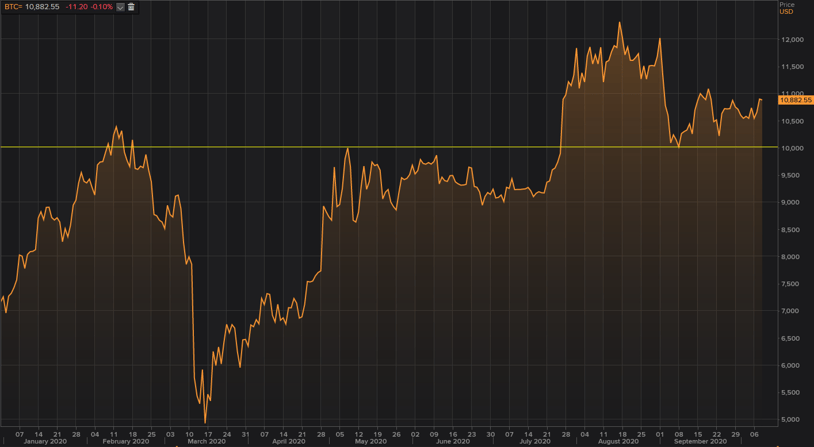 Figure 1 (Source: Refinitiv): Bitcoin Daily Chart : Since breaking above 10,000 this year, Bitcoin has safely settled above the key psychological level.

As the U.S. Gulf Coast braces for a third hurricane (named Delta) in the past 2 months, crude prices rose 3% on Thursday. The hurricane recently upgraded to a category 3 (with 5 being catastrophic) is expected to make landfall by Saturday. Approximately 30% of offshore crude oil production facilities has been forced to closed.

Bitcoin received a boost, both in price (up 2.3%) and in public relations when Square CEO Jack Dorsey announced the company had purchased $50mn worth of the cryptocurrency. Equivalent to 4,709 coins and 1% of Square’s total asset. As of today, approximately 18 million bitcoins have been mined out of the 21 million cap. Of that 18 million, only 16.3 million is actively circulated leaving 1.7 million considered zombie coins where some experts believe are forever lost.