Momentum seen in U.S. did not follow through into Asia, with Australia dropping 1.3% since open while Nikkei edged up slightly. Hong Kong fell on Yum China Holding’s IPO, of whom are operators of well-known brands like KFC, Taco Bell and Pizza Hut. Shares fell as much as 4.1% on their debut today. An utter contrast to Nongfu Spring’s bottled water IPO performance on Tuesday, whom rallied 85%.

Improving risk sentiment saw money flows back into major G7 currencies as the dollar index retreated from a 3-week high. Bitcoin and gold saw bounce off major levels while oil earned reprieve bouncing back from low 36’s to 38 dollars. Elsewhere the central bank of Russia forecast the initial bump in recovery will slow down in coming months with deflationary risk offset by a depreciating rubble. 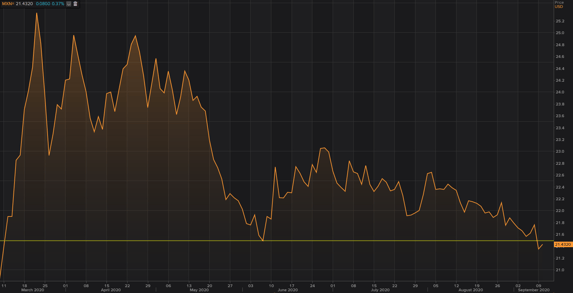 Figure 1 (Source: Refinitiv): USDMXN - Mexican peso rallies to 6-month on the back of the government unveiling 2021 budget.

Of particular interest, the Mexican Peso rallied 1.9% to a 6-month high after the government unveiled the 2021 budget, stripped of infrastructure spending and limiting debt to GDP ratio to only 70%. While Finance Minster Arturo Herrera note the budget as responsible, businesses feel they’ve been left to bare the brunt of COVID-19’s economic aftermath. Given fiscal tightening, expectations of a 25 basis point cut by the Bank of Mexico has been forward to this month despite recent inflation data above the central banks 3% target.