Price action for the on-going week sees global indices choppy following previous week’s tech-rout, where broad-based benchmarks declined as much as 10%. Evident as Nasdaq saw average daily trading ranges of 4%, though week to date the benchmark has only declined 2.9% and down 1.7% yesterday. S&P500 and Dow also retreated 1.5% and 1.4% respectively. European shares fell on the back of rising tensions between Brussels and U.K as well as ECB’s unchanged policy announcement. For the lack of data ahead, Asia is off to a quiet start, though Nikkei rallied 0.8% on open as Chief Cabinet Secretary Yoshihide Suga outdistances other PM candidates with polls showing he is widely expected to win the title in the ruling LDP leadership election. Suga intends to continue implementing Abenomics, of which entails aggressive monetary and fiscal reform to boost inflation.

The American greenback regained lost ground while EURUSD initially spiked 70 pips over a less dovish tone from the ECB’s monetary policy statement. Only to be stifled by ECB Presidents Christine Lagarde’s Euro dollar remark’s that the central bank is carefully evaluating implications of a strong Euro. Especially as Europe’s economic recovery loses steam. Across the English Channel, P.M. Boris Johnson stoked further tensions as the U.K. government broke international law by overriding Northern Irelands Brexit protocol. The protocol would have allowed goods to travel freely between Northern Ireland (Non-EU) and Republic of Ireland (EU) without custom checks. Amid rising political risk, the pound sank over 200 pips by the end of session. A no-deal Brexit would leave trade between continents in absolute chaos. 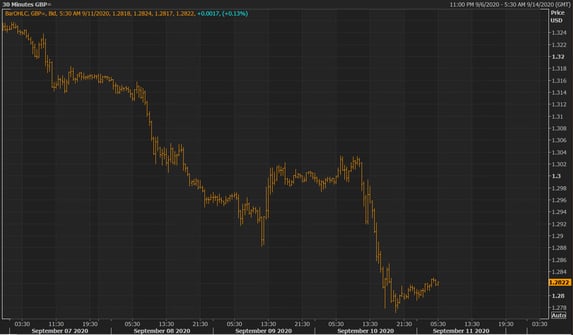 Oil prices resumed declines as U.S. inventories unexpected built into a surplus by 2M. Petrol consumption recovered from May to July, peaking in August at 7.8M barrels at day. However persistent struggles to contain COVID-19 and reducing purchases from China, the worlds largest importer as well as production increases from OPEC, will likely see inventories remain near surplus for on-coming months.

Elsewhere, a $300bn stimulus bill proposed by U.S. republicans failed to gain traction in the Senate. Of the 100-member chamber only 52 voted in favour of passing the bill, failing to reach the required 60 vote threshold.