Exceptionally stronger than expected CPI data whipsawed Nasdaq to end the session unchanged whilst both the S&P500 and Dow Jones slipped 0.4% and 0.3% respectively. Despite the high inflation reading, muted price actioned seems to reflect investor sentiment has moved on. Focusing on prospective growth in light of the spread of the Delta variant and a possible slowdown in China’s rebound ahead of GDP data scheduled to release Thursday. Just last week, the PBOC had cut reserve requirement ratios spurring speculation as to why the central bank had started to ease monetary policy again.

In Europe, benchmarks eased off recent highs with the STOXX down only 0.1%. Asia opened mixed but continued the overnight theme of muted volatility. The S&P200 rose 0.2%, Hang Seng gapped down 0.1% and Nikkei up slightly at 0.1%.

Continuing civil in South Africa saw the Rand depreciate 2.1% on Tuesday. Following the jailing of Former President Jacob Zuma last week after he refused to attend an inquiry over corruption during his nine-year tenure, his supporters rampaged through the streets, ransacking and looting. Initial police response had been lethargic such that the military had to be subsequently called in after 19 deaths. Meanwhile, the U.S dollar index produced one of their best single day gains for a month. Gold stalled at $1,807 and bitcoin fell lower to settled at $32,000.

Crude oil rallied above $75 after the International Energy Agency commented yesterday that without an OPEC deal to raise production, the oil market will “significantly” tighten “as demand rebounds from last year’s COVID-induced plunge…with OECD industry stocks now well below historical averages”. The agency further noted that demand is forecasted to grow fast during the 3rd quarter of 2021 on the presumption a rapid reopening of global economies. 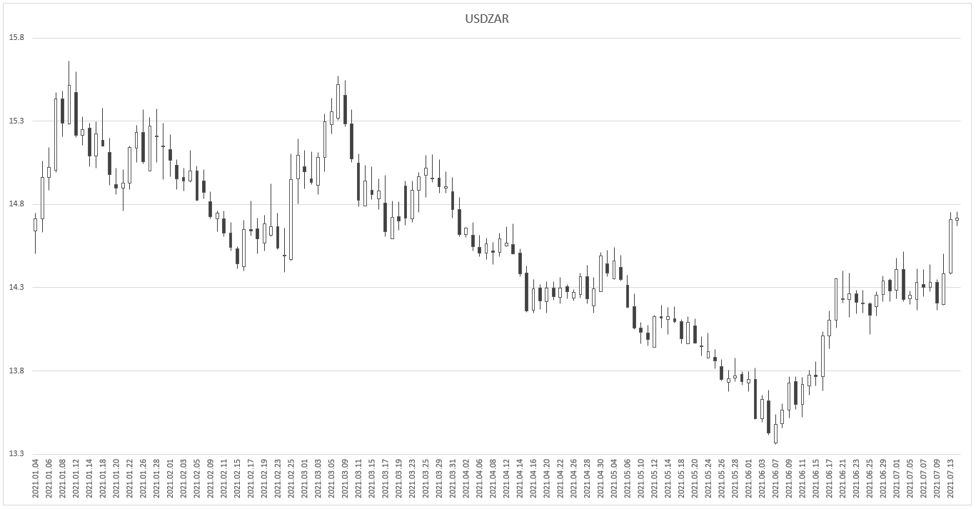