Apart from the yen, other G7 currencies eased off against the greenback ahead of tonight’s Fed meeting. As Yoshihide Suga cements his position as Japan’s new prime minister, repatriation in the yen is steadily growing with USDJPY at 105.44 by yesterday’s session end. Though Suga has reiterated in continuing his predecessors “Abenomics”, many doubt whether additional easing can be pursued considering the BOJ is already overextended. Debt to GDP is also one of the highest among developed countries, a concern for Suga given his first point of order is ponder whether an extension of fiscal aid is warranted. 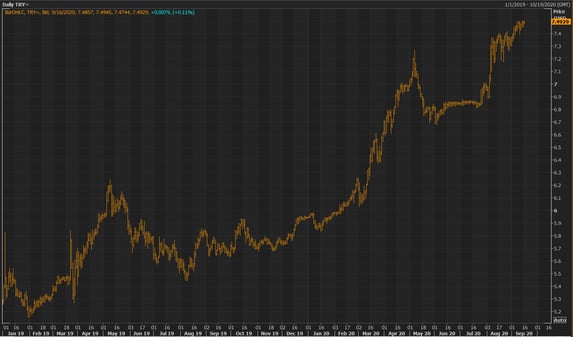 Recent data by Turkey’s central bank revealed 4bn of capital outflows into foreign currency bonds. Local ownership amounts to at a staggering 17.1bn. As the country suffers from inflation above 11% and an ever-depreciating lira, Turkish investors sought to hedge themselves through Eurobonds.

Elsewhere, crude oil regained ground above $38 as hurricane Sally is forecast to hit landfall Tuesday night. Flash floods and storm surges causing damage amounting to $3bn is expected. Given the severity and course, over 25% of offshore oil production has been shut, with workers pulled from rigs.