European indices and global futures tumbled amid London session as EU leaders refused to make concessions just hours before PM Boris Johnson was expected to announce whether the U.K. will walk away from negotiations. Brussels left the ball on Johnson’s court, of whom expressed his disappointment and will respond on Friday.

Nonetheless, by the end of U.S. session most broad-based benchmarks recovered on improving stimulus sentiment. Speaker Pelosi re-iterated the urgency for a relief package before elections as she continued talks with Secretary Mnuchin. President Trump further voiced his willingness for a bi-partisan deal exceeding $1.8tn.

Among the weaker performers of the day, Euro STOXX 50 settled 1.2% lower as investors were unnerved over accelerating COVID cases in Europe. In so far that Italy registered close to 9,000 daily cases, up from 7,000 while France jumped to 30,000, up from 22,500 the day before. Likewise, cases in Poland rose to a record 24% higher. With impending new restrictions, investors are growing weary the pandemic will continue into 2021 crippling Europe’s recovery. 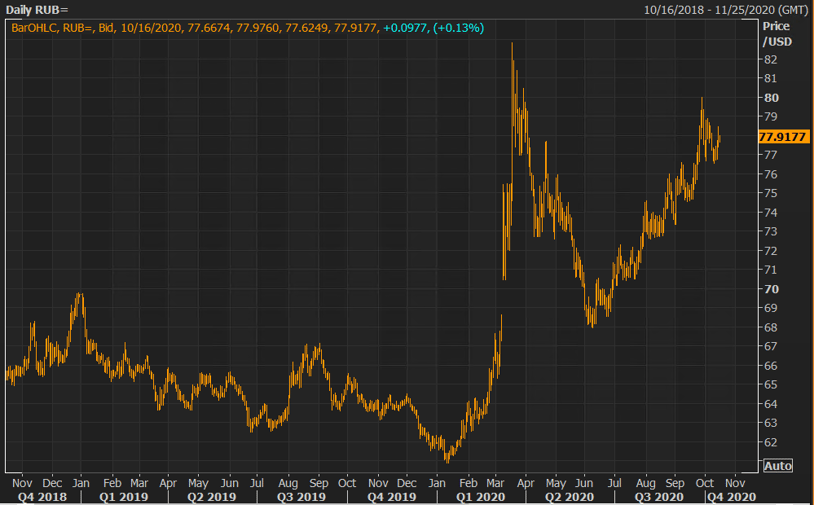 Figure 1 (Source: Refinitiv): USDRUB Daily Chart : Russian ruble remains one of the worst performing EM currency against the U.S. dollar and prefers it.

Of peculiar interest, alongside a slump in global oil demand and the Russia ruble depreciating 20% against the greenback year to date. When questioned regarding this underperformance, Industry and Trade Minister Manturov stated it was “awesome”. Since sanctions, the nation began shifting policy to ensure local industries were less reliant on U.S. and European imports. The minister believes an ever-depreciating currency will benefit Russia as long inflation is kept under wraps.