Fed chair Powell comments earlier were in line with FOMC statements last week, highlighting significant uncertainty about the timing and strength of recovery. Stronger than expected US May retail sales data pushed a positive risk price action across several asset markets however strengthen greenback against its G10 peers was prevented EM currencies from benefiting from generally positive mood in risk.

News broke of a global second wave this past weekend. Beijing is in lock down after an outbreak at a major food market - blamed on foreign fish. This has made markets nervous Developing countries have been hit the hardest by the pandemic, undermining hopes for a V-shaped recovery. If the spread of infection in and beyond Beijing continues in days and weeks ahead, then markets may be forced to re-think such expectations.

News released earlier today that North Korea blew up the joint liaison office with South Korea in Kaesong. South Korea commented saying "[this] abandons the hopes of everyone who wanted the development of inter-Korean relations and peace settlement in the Korean Peninsula". Although no lives were lost in the explosion, S.K is treating the threat seriously, stating they will "respond strongly" if the North "continues to worsen the situation." Russia expressed concern at the renewed tensions between the Koreas. Such scuffles between the two countries have historically blown over relatively quickly.

Markets also focus on the India-China border as 20 Indian troops are killed in what is now the worst clash in 45 years. Tensions have been visibly escalating for weeks. 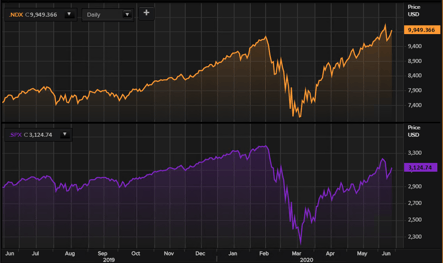 Figure 1 (source Reuters Eikon): In illustrating the fine balance in market sensitivity between the current COVID-19 climate and expansionary policies partaken by central banks and governments world-wide. Within 5 days of NASDAQ closing at all time highs on the back of historical stimulus, the indices suffered its biggest one day decline in three months on growing concerns of re-emerging coronavirus cases as economies began opening back up from lockdown and subsequently rebounded.

In the day ahead, we keep an eye on central bank speeches in Europe and the U.S. FOMC Member Mester Speaks before Council for the Economic Education event. Fed Chair Powell is due to speak in Washington, which will be closely watched as markets hope for further hints of possible future measures of expansionary policy. CPI figures are due in the UK, Canada and Russia. U.S. building come later.

Underperforming Swedish Krona and Polish Zloty are key to watch in coming days. ZAR will be key to watch in the coming days/weeks/months now that their new loan scheme is up and running. The SA government proposes such plans in response to the Covid-19 pandemic and the economic setbacks.