Muddled messaging and lack of clarity from yesterday’s Federal Reserve minutes has tempered recent gains in global indices. Wall Street reacted poorly when meeting minutes revealed a dovish tone short of market sentiment. Asia follow suit with Australia gapping down 0.6%, both Hong Kong and Japan sold off at open. The US dollar parred back losses, sharply appreciating against most majors. While risk-haven assets, bitcoin and gold failed to hold above key psychological levels $12,000 and $2,000 respectively. 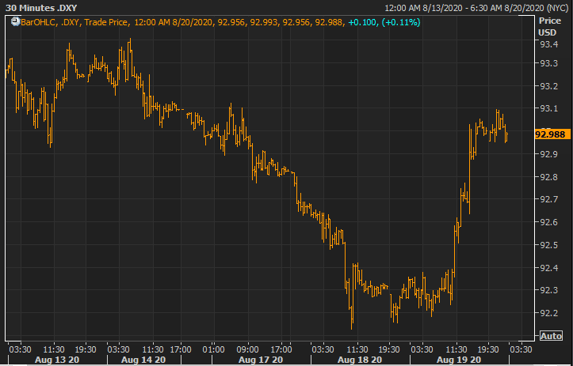 Hints that stimulus negotiations between congressional leaders are set to resume provided no support on Wall Street’s decline. More so at best, as a deal could only be struck in September. On the geopolitical front, US – China trade talks will be rescheduled on a latter unknown date. Larry Kudlow, Director of US Economic Council has noted discussions ‘going very well’ amid the US suspending extradition and tax treaties with Hong Kong. Trump had signed the executive orders back in July 14th in retaliation of China interfering with Hong Kong’s autonomy.