Tesla pulls Nasdaq to record highs as the electric vehicle company recently reinvigorated investor interest by announcing a 5-to-1 split. The stock settling just above $2,000 has gained 45% in the past 7 days, whilst the tech benchmark rose a modest 4.5% the same period. Despite poor jobless claims figures, the remainder of Wall Street followed suit though Asia rallied on open, optimism fizzled mid-session.

Elsewhere, the US dollar lost ground against other majors after yesterday’s unemployment claims. In turn, gold retraced back some losses from Wednesday’s $75 drop.

Surprisingly, the Turkish lira remained steady after the central bank left interest rates unchanged at 8.25% on Thursday. Markets had anticipated a possible rate hike to 10%, but instead was left with fringe policies to cease funding on one-week repo’s and an increase in mandatory reserve ratios for lenders. Turkey’s leader President Erdogan had always repeated a view that high interest rates leads to high inflation, a belief other central banks oppose. 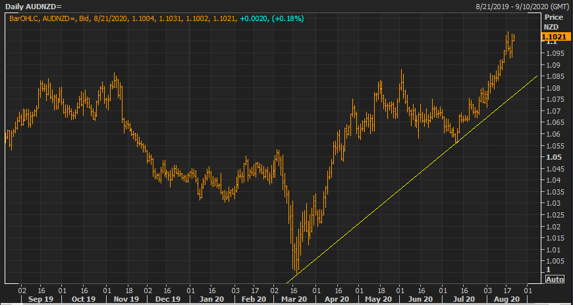 At the end of yesterday’s session, AUDNZD closed at 2-year highs. Since March lows, the Aussie dollar has gained just under 10% against the Kiwi. The steady appreciation can be largely explained by the differing approaches implemented by each respective country central bank. With cash rates at record lows the RBNZ has continued to expand its balance sheet and is even considering taking cash rates to negative territory. Across the Tasman, Australia’s RBA has halted any additional pace of quantitative easing and shifted responsibility towards further Government assistance instead to place the economy back on track.