Wall Street added to the global fall in equities on Monday as the liquidity crisis of Evergrande shook benchmarks in major financial centres. The S&P 500 fell 1.7%, marking its worst day of trading since May as the sell-off hit the entire market, with just 50 stocks in the index finishing the day in the green. The Nasdaq Composite slid 2.2%, while the VIX index, a well-known gauge for fear, hit a high of 28.8 (its highest level since May) before retreating to 25.7.

Across the Atlantic, all major European indices were down on Monday, with the STOXX50 dropping by 1.7% weighted down by sliding commodity prices and in turn the mining sector itself. A bigger-than-expected jump in producer prices last month threatened ongoing quantitative easing prospects with the DAX diving 2.3%. But most importantly, the blue-chip German index began trading on Monday with an increase in the number of constituents to 40 from 30.

Elsewhere in Asia, Japan’s Nikkei the latest to be caught up in the global sell-off sparked by Evergrande, with the main indices down more than 2% at one point on Tuesday’s morning. Hang Seng slipped as well, with the benchmark sinking to its lowest since Oct 2020 in morning trade to 23,771.46 before gradually recovering above 24,000 by midday break. Mainland Chinese stock markets are closed for the mid-autumn festival and will reopen on Wednesday.

Crude oil declines to $70.50 during U.S. session as risk-off appetite prevailed but is set to recover amid Asia following reports from production facilities along the Gulf of Mexico unable to resume until next year resulting from Hurricane Ida’s damage. A remark expected to be reinforced by U.S. inventory data looking to decline by more than 3m bbl last week.

Despite growing risk-off sentiment, the U.S dollar held steady whilst gold rallied to $1,764. Surprisingly, bitcoin continues to slide hitting as low as $40,200 intra-day on lackluster support. 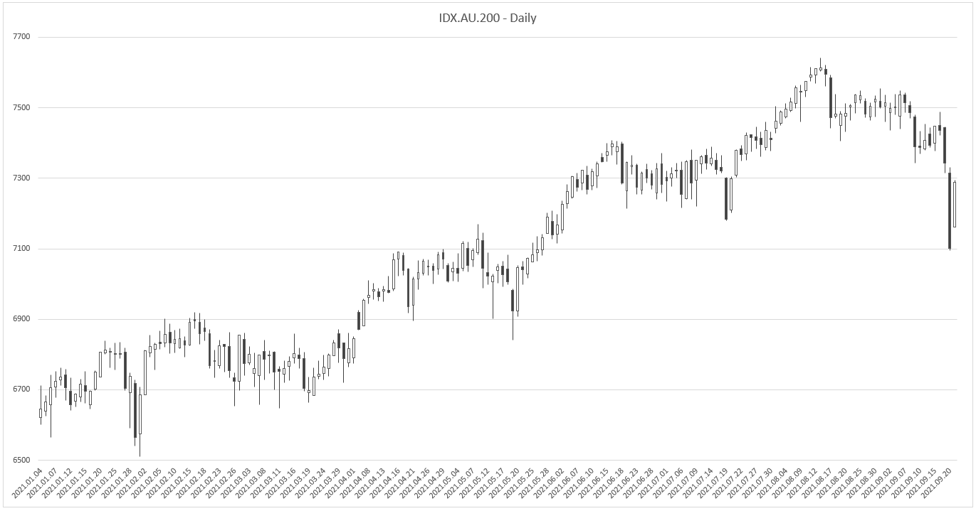