Last week’s losses retrace on back of news that Beijing only had 9 new (reported) cases. US and Asian indices trade higher from Friday’s close. AUD then NZD & GBP outperform to start the week. EURUSD trades up. Gold hit monthly highs as investors seek the safe-haven metal over concerns there will be a delay in global economic recovery

AUD is in focus. Bloomberg reports that Australia’s second-most populous state has tightened coronavirus controls following a spike in cases last week. Victoria extended a state of emergency by four weeks to July 20, halved the number of visitors allowed in homes to five and delayed a planned increase in the size of gatherings in cafes, restaurants and pubs.

JPY is key to watch. There are 111 countries/regions on Japan’s no entry list. However, Japan may follow suit like several other Asian countries to have a "travel bubble", which would open the country to travellers from places with similar coronavirus safety measures. So far, the list will likely include Australia, New Zealand, Thailand and Vietnam.

THB -BoT posted that commercial banks must freeze interim dividend payments to shareholders and suspend stock buybacks to preserve capital. The Baht continues on its solid run however lack of direction and liquidity concerns remain prevalent. BoT have suggested that they are ready to step up measures to curb THB strength. The Finance Ministry is worried about the fast rising baht, assuring investors the baht is only strengthening in line with regional currencies.

ZAR Finance Minister Tito Mboweni will provide covid19 updates in a ‘mini Budget review’ this week. CPI figures are also closely watched- a slowdown in April CPI to 2.9% YoY, from 4.1% YoY in March.

TRY- The closely monitored Lira has been hit hard by the pandemic. Turkey's central bank suspended until year end a requirement that banks with a real annual loan growth rate above 15% must keep their adjusted rate below 15%, so they can keep credit flowing as the economy reopens from a coronavirus lockdown. Turkey's central bank is expected to trim its policy rate by 25 basis points to 8%, a Reuters poll showed on Friday, a relatively limited cut in an aggressive easing cycle that has lasted nearly a year. 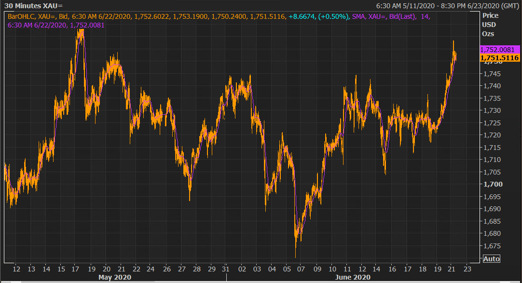 Scheduled economic events this week are somewhat muted compared to last week. Key events come from euro area PMI prints and then central banks publication of the ECB accounts and of the US Fed bank stress test results. Chinese banks will be closed Thursday in observance of the Dragon Boat Festival.