US dollar continues its decline whilst precious metals surge towards historic highs. News of stimulus packages deals in Europe whilst US in disagreement spurred investor sentiment to more safe haven assets against the dollar. Markets fear political frays will leave the size of the stimulus package short of expectations. 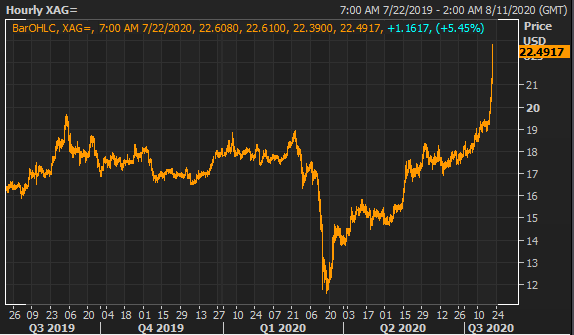 Headliner Review
Members of the European Union struck a historical deal yesterday. A 750bn recovery fund, dispersed accordingly across members to assist in their economic reconstruction for the next 7 years. Of which, 390bn in the form of grants favouring weaker states. Originally deadlocked by Austria, Denmark, Netherlands, and Sweden, of whom wanted to pare back the size of the fund and preferred a loan structure instead. Settled in return for a boost in their budget rebates. Netherlands the biggest winner with rebates increasing to1.92bn from 1.57bn.

Across the Atlantic, House and Senate members struggle in negotiations on a top-up stimulus package for the US. Disagreement predominantly centred on the size of the package. Republicans offering 1 trillion dollars. Democratics believe 3 times that amount is required to support America’s ailing economy.

Amidst intense scrutiny, both Judy Shelton and Christopher Waller successfully obtained approval from the Senate Banking Committee. A final vote by a full Senate awaits. Many weary of Shelton’s narrative as concerns grow that she could politicise the Fed and diminish the institutions independence. During the committee, Shelton received no votes from Democratics, whilst Waller obtained five.