Broad-based benchmarks dragged down globally by banking following a report released by Buzzfeed alleging rampant money laundering practices between 1999 and 2017. Suspected amount of activity equated to $2tn. Declines on Wall Street were further exacerbated over deteriorating prospects that a secondary stimulus bill will fail to reach an agreement by September’s end as the U.S. Senate remains in stalemate over the size of the relief package. European indices fell their most in 2 months over renewed piecemeal restriction measures in the U.K, Demark, Greece and Spain. Sparking fear that it may lead to a second nationwide lockdown. Travel and leisure shares felt the brunt of concerns. Despite a cascade of negative news, Australia and Hong Kong gapped higher on Asia’s open with Japan edging down. 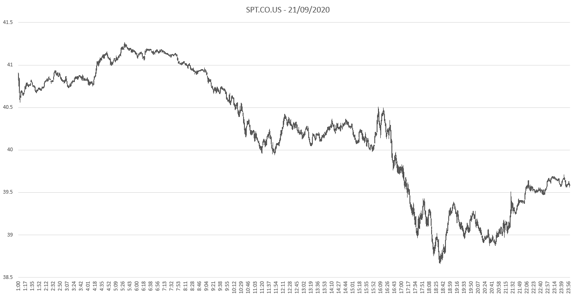 Figure 1 (Source: IS Prime): SPT.CO.US Intraday - As supply shocks fade and a resurgence in COVID-19 impedes demand, crude oil prices tumbled as much as $2

Global nervousness in the market, saw a flight to safety as the greenback gained against its peers. The U.S. dollar index hit a 5-week high. A slew of Fed speakers including Jerome Powell on Monday further encouraged dollar demand with their reluctance to disclose any further details regarding how the Fed will achieve an average 2% inflation. The Mexican peso and Canadian loonie fell 1% and 0.8% respectively alongside crude oils 3.2% tumble as the resurgence of COVID-19 threatens an already fragile economic recovery. Attention on lower inflation expectations saw gold break down 1.9%, out of its recent consolidation. However, attempts to breach the 1,900-level failed. Likewise, the HKMA sold another 2.1bn HKD in defending the 7.75 band.