Markets confused after White House Advisor Navarro said the the US-China trade deal was “over” and linked it to Beijing not sounding the alarm on coronavirus earlier, Reuters reported. Shortly after the comments by Navarro, president Trump tweeted: “The China trade deal is fully intact. Hopefully they will continue to live up to the terms of the agreement!” 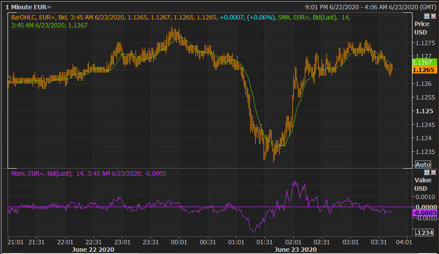 THB saw some price action on back of risk appetite swings coming from the White House's earlier comments about the US-China trade talk. Next up for the Baht will be tomorrow’s monetary policy decision, the main policy rate is expected to remain unchanged at 0.50%. The bank of Thailand will also be bringing in a new Governor in coming days.

Elsewhere, aggregate Retail EM positions are net long. PLN positive retail sales data drove its recent outperformance. NBP likely to stay course with its asset purchase program with willingness to intervene and push PLN weaker. The National Bank of Poland prefers a weak currency during the pandemic. The central bank is being closely monitored- last week's rate cut was a surprise after it unexpectedly cut rates last month in an effort to buffer the economy from the virus.

RUB swings against USD and EUR. The Central Bank lowered its official dollar rate. Russia has seen low inflation and a more stable currency. After a year without talks, the Nuclear weapon discussion between the US and Russia have restarted.

GBP saw gains on back of Bank of England member Bailey thinking the central bank should shrink the balance sheet before a rate hike. As bloomberg reported, "Bank of England Governor Andrew Bailey signaled a major shift in the central bank’s strategy for removing emergency stimulus, stressing the need to reduce the institution’s balance sheet before hiking interest rates."

Today brings a flurry of June PMI prints out of EUR, GBP, USD. The prints will be among the most important macroeconomic news of the week, showing us an indication of economic impact from the virus outbreak

Tomorrow the RBNZ will deliver its OCR decision and leave the cash rate at 0.25%, with a dovish tone and markets are expected to react minimally.

Chinese Banks will absent Thursday in observance of the Dragon Boat Festival.