Fresh jitters crept into Wall Street as out-going U.S. President Trump signalled he may not sign the congressionally approved 900bn COVID relief bill. A four-minute video posted on Twitter called the 5,600-page legislation a disgrace and that he would ask congress to amend the to “increase the ridiculously low $600 to $2,000 or $4,000 for a couple”. Both the S&P500 and Dow Jones edged lower by the end of session, whilst Nasdaq outperformed relatively as lingering concerns over the coronavirus variant had investors still favouring stay-at-home stocks.

Meanwhile, defying daily infections hovering above the 30K mark, new tier 4 restrictions in south-east England and intensifying Brexit talks, the FTSE100 stabilised up 0.4% on Tuesday. Germany’s BioNTech alleviated concerns over the new strain suggesting existing vaccines are just as effective and if necessary, a new vaccine could be developed within 6-weeks. Despite prospects of negotiations continuing after Christmas, both Boris Johnson and Ursula von der Leyen stressed a desire to close a deal by Wednesday night. Fishing rights remain a key point of contention. Elsewhere, broader European indices outperformed settling near intra-day highs following Monday’s scare.

Coming into Asia, choppy start for indices. The S&P200 gapped up 0.24% on open after finding support at 6,600, Hong Kong suffered a 0.37% gap down only to recover its entirety mid-session, while the Nikkei slipped following cumulative infections topping 200K and PM Suga’s reluctance to declare a state of emergency.

Resurging fragments of uncertainty fuelled U.S. dollar demand across the board. As expected, frets over Brexit saw the euro and pound underperform amongst majors, with the former depreciating 0.6% whilst the latter down 0.8%. In the meantime, China’s central bank is anticipated to reduce the dollar’s influence against it’s yuan basket. Ahead of Bank of Thailand’s policy decision, the Thai Baht loses 1.4% in 2-days as rates are expected to stay at 0.5%. Crude oil slips another dollar to $46.62 as global restriction hamper petroleum demand. Whilst gold retreats, bitcoin surges closer to $24,000 on the back of unrelenting institutional demand. 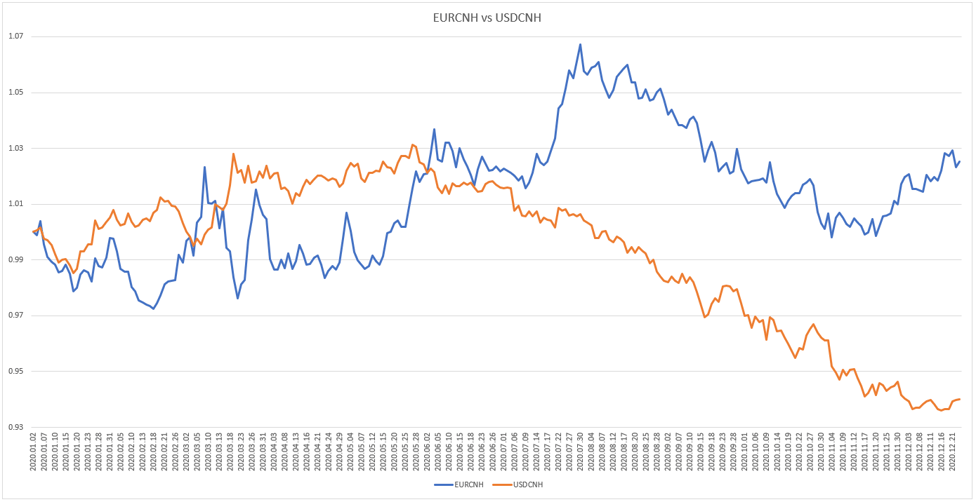 Figure 1 (Source: IS Prime): EURCNH vs USDCNH Daily (rebased to 1) : Growing divergence between the EUR and USD becomes more apparent as the PBOC reweighs China's yuan currency basket in favour of the euro.