Markets await larger scale happenings this week, focus will primarily be on the Fed and ECB meetings to set the tone.

The debate continues between a 25bps and 50bps Fed rate cut for the July meeting- this would be the first reduction in borrowing costs in more than a decade. The U.S. is faced with slow global economic growth and elevated trade tensions. President Trump has been a critic of the Fed raising rates in the past. Bloomberg posted on the matter, Congress and the White House are on the verge of a 2y debt limit deal. This is in line with our expectations but note President Trump will also need to support the agreement. If confirmed, this would be positive as debt ceiling concerns have maintained FX funding at extremely tight levels.

Weaker growth and inflation also has the ECB considering a rate cut sooner than later. Last month, the ECB cut its own forecasts for euro-zone growth in the next two years to 1.4% from 1.6% and 1.5%. Inflation concerns also play a key factor as it is unlikely to return to the ECB’s target of sub 2% in immediate future.

Oil remains in focus as tensions in the Gulf continue to grow. Oil rallied after the recent seizure of an Iranian tanker this weekend.  On Monday, the US has announced plans to sanction China's state-run oil trader Zhuhai Zhenrong Corp. for allegedly violating restrictions imposed on Iran's oil sector.

The RBNZ is looking to refresh their unconventional policy strategy has sent the currency lower today. Bloomberg reports “This year the Reserve Bank has begun scoping a project to refresh our unconventional monetary policy strategy and implementation. This is at a very early stage,” the RBNZ said in response to an Official Information Act request for work on non-standard policy measures. 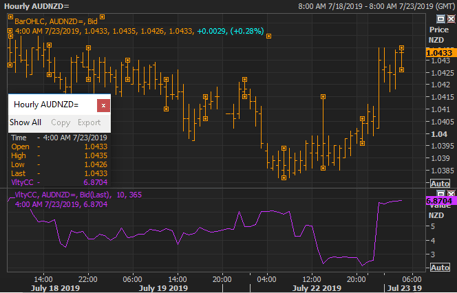 Today’s events kicked off with a speech by the RBA’s Deputy Governor, then we see a series of second tier data from GBP, EUR and USD. The latest BoJ core CPI y/y is also due. We have seen the global dovishness trickle into EM this mont- HUF and NGN central banks hold tight and are expected not to change rates in today’s meetings. Data from SGD comes in the form of CPI.