FX volumes were up Tuesday by roughly 13% from 30-day moving average. Flows were concentrated in GBP, AUD & EUR, volume predominantly driven by central bank talk. EM activity was slightly lower yesterday after previously seeing a surge in volumes on a flurry of rate cuts.

A Fed rate cut is imminent given the low growth overseas, a trade war and some signs of softness in a relatively strong U.S. economy. USD continued its rally Tuesday on expectations that the Fed will cut rates by 25bp instead of 50bps in July. Confusions around the Fed’s next moves started last week when NY Fed president Williams said policy makers need to act quickly when growth slows. He later said it was a historical analysis rather than an intended policy statement.

S&P also rallied on US-China trade prospects. US officials confirm that US trade negotiators would go to China next week for in-person discussions."Multilateral and national policy actions are vital to place global growth on a stronger footing,” the IMF said. “The pressing needs include reducing trade and technology tensions and expeditiously resolving uncertainty around trade agreements (including between the UK and the EU and the free trade area encompassing Canada, Mexico and the US). Specifically, countries should not use tariffs to target bilateral trade balances or as a substitute for dialogue to pressure others for reforms.”

Boris Johnson will officially take over from PM May Wednesday. “Dude, we are going to energize the country, we are going to get Brexit done,” Johnson said. Markets reacted little on the news instead focus remains on Brexit. 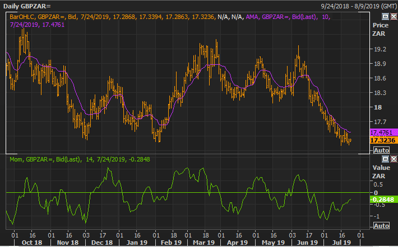 Aside from the above, focus today will be on EUR and USD PMI data and more home sales data for USD. CPI data for MYR, ZAR, MXN. ZAR news comes in the form of an announcement of the details of a strategic plan to provide long-term financial support for Eskom. Global risk also pay a key factor. Also in the EM space we see Bank of Thailand Governor Veerathai Santiprabhob speech about "formulating for the future of corporate governance. In Nairobi, Kenya Monetary Policy Committee to hold its next rate-setting meeting.