The RBA’s Governor Lowe provided additional insight in a speech today. The RBA has twice reduced interest rates since June to an all-time low of 1%. He reiterated in his speech today the need for the government to provide fiscal support to prop up growth and inflation. "On current projections, it will be some time before inflation is comfortably back within the target range […] It is highly unlikely that we will be contemplating higher interest rates until we are confident that inflation will return to around the midpoint of the target range."

GBP saw little movement on news that Boris Johnson is taking over as PM- focus remains on Brexit however parliament’s summer recess starts Friday so it is unlikely there will be much progress until after summer recess (ending September 3rd).

The ECB remains the main focus for the week, we await President Draghi’s comments on rate cuts, changes in the forward guidance and restarting the net asset purchase program. The ECB meeting arrives ahead of a similarly decision by the US Federal Reserve.

Asia currencies are rangebound ahead of the ECB meeting. Political tensions increase on news that North Korea fired of two short-range missiles from the east coast- we see reduced appetites on riskier assets. KRW weakened. JPY looks unconcerned …about anything, JPY seen consolidating for 2nd straight day.  Regarding the N.Korea missile launch.. "We have confirmed that the situation is not one that impacts our country's national security. Going forward, we will work closely with the United States," Abe was quoted. Other JPY focus is on the BOJ meeting next week. Reuters suggest that the BoJ officials are divided on whether to ease monetary policy or hold off on action. 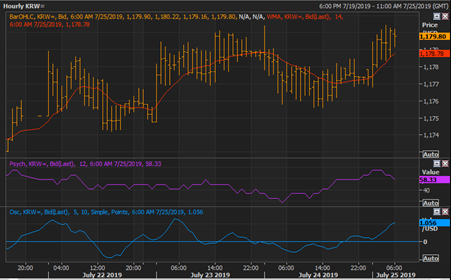 Investors have been waiting all week for the ECB meeting. We also see the latest Spanish and NOK employment Figures, the SEK economic survey, EUR’s German ifo (focus has been on Germany’s manufacturing sector which lingers in a recession), USD durable goods data and the Kansas City Fed Index and later the Fed issues the weekly balance sheet. The week ends with USD Advance GDP data. TRY rate decision today arrives from the new Governor Murat Uysal. Rates currently sit at 24%... The Turkish central bank will cut rates, the question is by how much?