EURUSD stayed within a 100 pip range between the ECB statement and press conference. Rates were left unchanged, the ECB said it will review options for potential new net asset purchases. Draghi said significant monetary stimulus is needed. ECB officials told Reuters after the meeting that an interest rate cut in September appeared certain, while government bond purchases and a revamped policy message were also likely. The ECB said weak manufacturing sector and uncertainty over Brexit and trade threatened to derail growth in the bloc.

Yesterday brought a +30% increase in global currency flows from 30-day MAs, among which TRY was a top deviator from its 30-day average volumes. TRY’s new central bank governor delivered a 425bp rate cut at his first meeting, taking the 1w repo rate down to 19.75%

Elsewhere KRW remains in focus after N. Korea’s small missile launch. Diplomacy is not out of the questions even if the launches were "personally organized" by North Korean leader Kim Jong Un "as part of the power demonstration to send a solemn warning to the South Korean military."

ZAR took a hit yesterday after the ECB decision and on back of headlines surrounding the South Africa’s government announcement of additional funding for the struggling Utility company, Eskom. 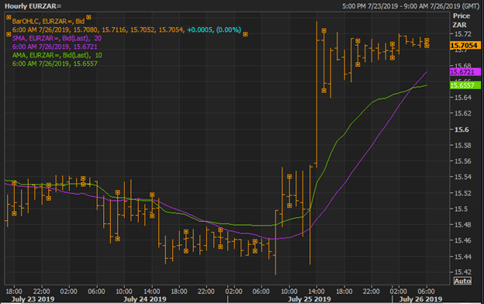 Eurozone growth and inflation stats data-prints next week could be highly influential for the EURZAR outlook.

Today’s headline comes from USD’s Q2 GDP release, which will be crucial ahead of the Fed rate decision - consensus expectations are for a gain of 1.8%QoQ vs. 3.1% prior. Next week we see Bank of Japan’s Monetary Policy Meeting, U.S. Federal Reserve's Federal Open Market Committee & Bank of England to release Inflation Report.