Risk sentiment improved to close last week. The week ended with a stronger sterling and dollar and weaker Euro, Yen and Swiss Franc. Focus came on Euro after a high-level ECB official suggested there will be a forceful easing package announced next month.

Attention in the week ahead will be split between a few key data prints throughout the week, the G7 summit and the Jackson Hole symposium at the end of the week. The focus of the symposium is stated to be "challenges to monetary policy". The biggest effects on the market will be trader confidence in monetary policy on whether fiscal policy will maintain its ability to moderate volatility in fiscal markets, as safe-haven currencies have already questioned the latest from the Fed. Powell will be pressed to address the stock market’s wild swings and recent bearish bond yield inversion.

Our APAC teams makes special note of AUDNZD, stating "AUDNZD has finally cleared the moving average congestion and has taken out a downtrend dating back to the 10th of August last year. We are happy to add to cross longs here and move stops to the 200 day MA around 1.0510." 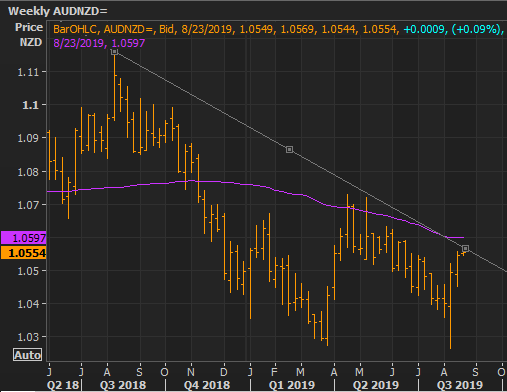 Volatility is expected to continue into this week with special attention on collapsing yields, inverting curves, weak data and heightened trade tensions. The weeks first major event arrives with the Aussie monetary policy minutes posting early into Tuesday trading. The latest monthly update to German Buba report is also due.

CAD will be in focus this week, first with manufacturing sales Tuesday and CPI updates Wednesday, crucial retail sales print Friday. Yields have reached new lows (along with the US).  We also await anything new from the BoC since we last heard from them in the last press conference July 10. A steep rate cut of is expected in the September meeting. Comments from our APAC team, "CPI and retail sales this week will be telling and any weakness to these will see CAD punished as markets need to likely readjust then to the BOC needing to join the doves. Converesly, should they be strong then CAD may well come roaring back but at this point it feels like perhaps it is time for Canada to fall into line with the rest of the world's economies."

USD looks at the minutes of its July meeting due Wednesday- the Fed cut rates for the first time since 2008 on signs of a global slowdown, trade tensions and push boost too-low inflation.

Mid-week Eurozone data will also highlight the week with a series of PMIs. Focus also comes down on the Italy uncertainty. On Tuesday, Prime minister Giuseppe Conte faces both a no-confidence vote and is due to speak on the government crisis in front of the upper house of parliament.