The bank of Japan held rates as expected. The statement on monetary policy came of more dovish than June's meeting.The bank went on to say that additional easing measures are possibility and that there are plans to hold rates extremely low for the foreseeable future. USDJPY will be key to watch as it may see significant pressure from the FOMC. 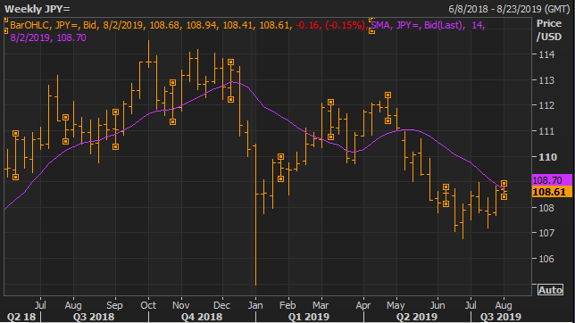 GBP is in focus as it continues to plunge. As our APAC team states, "GBP the only mover overnight as most majors trade near unchanged from the open. GBP plunging just shy of 2% to its weakest level since March 2017 as U.K. Prime Minister Boris Johnson stepped up the government’s preparations for leaving the European Union without an agreement. " See more: https://mailchi.mp/fe36940a9715/is-prime-morning-commentary-243631

Fed meeting Wednesday is the headline for this week. Market expectations point to a quarter-point rate cut on Wednesday, which would be the first rate cut in a decade. Monday saw Choppy/mixed trading in equity and rates going into monday close- Dow futures indexes have since traded slightly higher ahead of the Fed meeting. Related, investors closely watch for updates to trade talks between the U.S. and China.

By way of update to comments on ZAR concerns last week- ZAR outperformed globally on Eskom headlines.Concerns for South Africa’s Budget continue to weigh ahead of June's budget announcement today.

Up Next
There is no shortage of data today, especially for Europe. Today brings confidence and inflation figures for EUR, the NOK retail sales report, CHF’s KOF Economic Barometer and USD PCE price index and personal spending data. ZAR sees a much awaited budget announcement today. Later we see China Manufacturing PMI figures and ANZ Business confidence from NZD. AUD CPI will be a headline just after rollover. THB comes off holiday today and PEN, MAD and MYR are on holiday.