Speaking over the phone, US – China officials suggest a trade deal is likely to be achieved by January 2021, though concerns have been raised over the pace of existing purchases, standing at $77bn. China would need to buy another $123bn to comply with terms originally signed back in January 2020.

Alongside the RNC convention, President Trump announced an additional $1bn food purchase program to aid families dealing with economic hardship, unable to meet subsistence levels. The existing $3bn program is set to expire by the end of August.

Both S&P and Nasdaq settled at records highs whilst Dow led gains yesterday, is still 4.5% below all-time highs. On Monday, the CAC40 rallied by 2.29%, EuroStoxx600 by 1.58% and DAX30 by 2.36%. With Japan rallying 1.1% on Asia open, Australia and Hong Kong looked towards a modest start, however later in the session, gains have subsequently retraced back. US dollar holds steady as the next likely driver of direction will be Powell’s speech on Thursday. 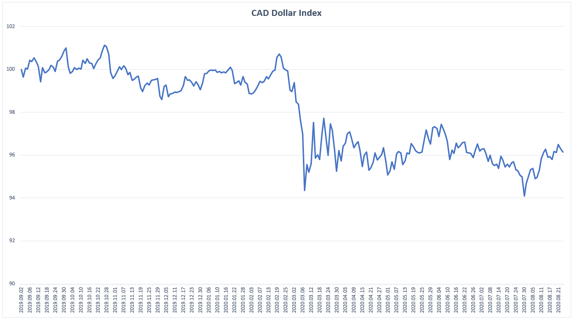 Most major currencies have made significant recoveries against the greenback since January's depreciation. Among them, Canada’s loonie thus far has been the under-performer. Weakening not only against the US dollar but also other G7 currencies as bearish bets mount. Since May, the COT report has showed speculators increasingly bearish as oil exports and other Canadian commodities fail to drive exports.