Resurgence in COVID-19 cases and emergence of the highly transmissible Delta variant looks set to derail the global reflation trade as cyclicals underperformed on Monday. In Europe, tourism related stocks tumbled leading to broad based benchmarks posting losses after Spain, Portugal and Malta are looking to impose new travel limits from Britain as daily infections hit just under 18,000 cases. Hopes are also fading that the U.S and U.K. would agree to open travel bubble before summer finishes. By sessions end, the FTSE100 had slumped 1%.

Meanwhile, by and large Wall Street defied global sentiment with President Bidens’ infrastructure deal keeping risk-appetite high. The S&P500 edged higher to close at all-time high times whilst the Dow Jones declined 0.6%. Nasdaq benefited from the mild delay to return to normalcy as the index surged 1.1%.

In Australia, Delta variant outbreaks across Sydney had saw the city enter emergency lockdown for at least 2 weeks. The S&P200 gapped lower by 0.3% on open but has since recovered lost ground. Worsening labour market conditions ahead of an already shaking Tokyo Olympic dragged the Nikkei half a percentage point down. Elsewhere, the Hang Seng down 1% with the special territory banning all passenger flights from the U.K.

Crude oil retreated $1.30 following a tumultuous run from $61 since late May. Largely from uncertainty over global demand recovery alongside OPEC’s expected productions increase in the coming months. In defiance over a global regulatory crackdown, bitcoin stabilises above $34,000 after failing to push below $30,000.

The U.S. dollar manage to eke out gains overall against counterparts with the South African Rand in focus. On Sunday, President Ramaphosa moved the country to alert 4, outlawing social gatherings, closure of schools and limiting travels. The rise of the Delta variant puts South  Africa's economic rebound for 2021 in peril. Since the start of the year, the rand had gained 8.6% only to depreciate 6.7% the past month. 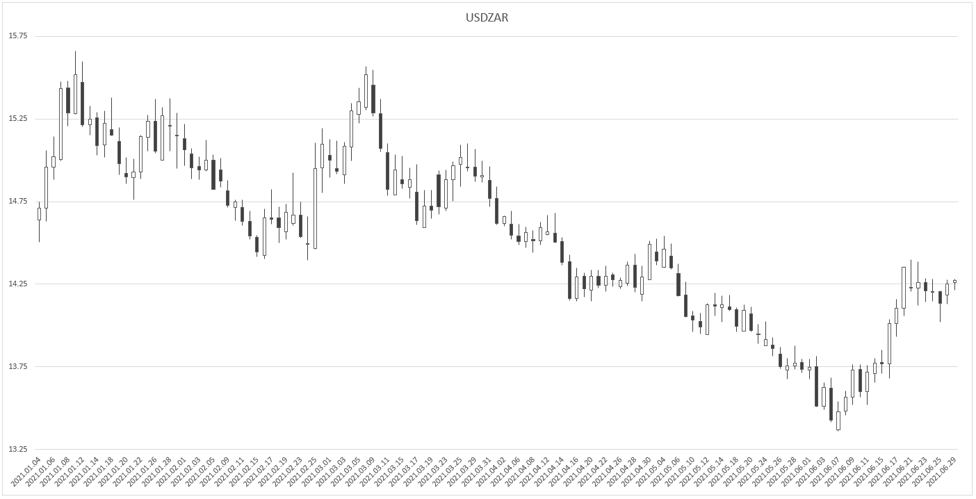