Wall street rallied Thursday on back of strong jobs data. Asia shares also seen on the rise. US data put pressure on gold.  In currencies, the Kiwi was top gainer against the USD. the Aussie dollar followed close behind. SEK and NOK trailed in the G10. ZAR and TRY saw little action.

Figure 1 (source Refinitiv Eikon): Nasdaq 100 index yearly chart.  Forerunning global markets Nasdaq settles at historic highs as technology firms shown to be immune from the fallout that is the Coronavirus crisis. Evident from the current crisis is the widening gap in dual economies between tech and the harder hit traditional manufacturing & services.

Better than expected Non-farm payrolls and unemployment data out of the U.S shows that the economy was well on its way to recover, however any positive figures remain shadowed by increasing number of new covid19 cases. There are currently 17 candidates undergoing clinical trials for a new vaccine. Promising preliminary results may well be in the headlines within the next month or two. 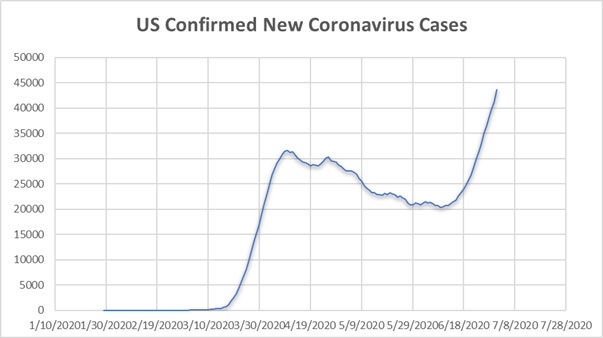 The Russian referendum vote concluded yesterday, which consisted of around 200 constitutional changes. Key take aways are that President Putin will be allowed to serve two more terms, effectively allowing him to keep power until 2036 and the referendum has defined marriage exclusively as a union between a man and a woman.

Anticipate muted markets today as the United States break early for 4th of July fireworks. However, brace for coming volatility in the week ahead as rhetoric between the nations across the Pacific intensify. Tit for tat, US senate responds to China-HK securities law by passing their China-Sanction bill specifically punishing Chinese officials and business whom assist China in restricting Hong Kong’s autonomy.

Though positive US employment figures offer support in the case for a US indices bull markets, layers of uncertainty from continuing rise in Coronavirus cases and the eventual end of favourable unemployment (in July) may be cause for concern.