Wall Street ends 2020 settling at record highs after a turbulent year which saw the Dow Jones lose as much as 38% between February and March. Following March lows, Nasdaq was among the better performers posting gains of 93% as investors shift focus from cyclical stocks to innovative stay-at-home tech firms set to benefit from a global virus pandemic. It is not all smooth sailing coming into 2021. With a newly elected U.S. President and Georgia’s 2 senate seat run-off at stake. The winner of the run-off will determine whether Republicans or Democrats take Senate majority, dictating economic policy for the next four years.

Elsewhere, European and UK indices suffered consecutive days of declines amid a resilient virus and stricter measures set to devastate economies across continents. Alongside delaying the opening of schools, PM Boris Johnson is contemplating tightening restrictions. Meanwhile, Germany will extend national wide lockdown till end of January and France implemented a nightly curfew. The pace of vaccinations has been overly cautious, and nations are expected to pick up the pace in the new year.

Mixed start to 2021 for Asia-Pacific indices. The Japanese Nikkei tumbled 640 index points intra-day following an announcement by PM Suga to start vaccinations by the end of February. The market was expecting the PM to declare a COVID-19 emergency in the coming days but only to be disappointed. Despite, delisting threats for Chinese oil companies on the New York Stock Exchange, the Hang Seng rose 310 points, whilst Australia climbed 78 points defying gloomy sentiment as Sydney imposed stricter social measures yesterday amid a 3rd wave outbreak. In an attempt to dampen the economic impact from the growing Australia – China trade war, PM Scott Morrison is moving to strengthen trade ties with smaller island in the Pacific Ocean in exchanging their neighbors with COVID-19 vaccines.

The American greenback retains its downward trajectory in the new year as majors set break away to new multi-year highs. Gold breaches back above 1,900 in anticipation of higher inflationary pressure resulting from U.S. stimulus. Ahead of OPEC’s meeting today, crude oil rises for four consecutive days to $49 expecting a delay in raising output in February as surging coronavirus infections engulf developed economies.

On the cryptocurrency front, bitcoin relentless soars to record highs of $34,782 during the holiday break. The 206% meteoric rise initially fueled by PayPal’s integration into their payment services back in October 2020, has seen the digital coin gain populous acceptance as a mainstream alternative payment method. 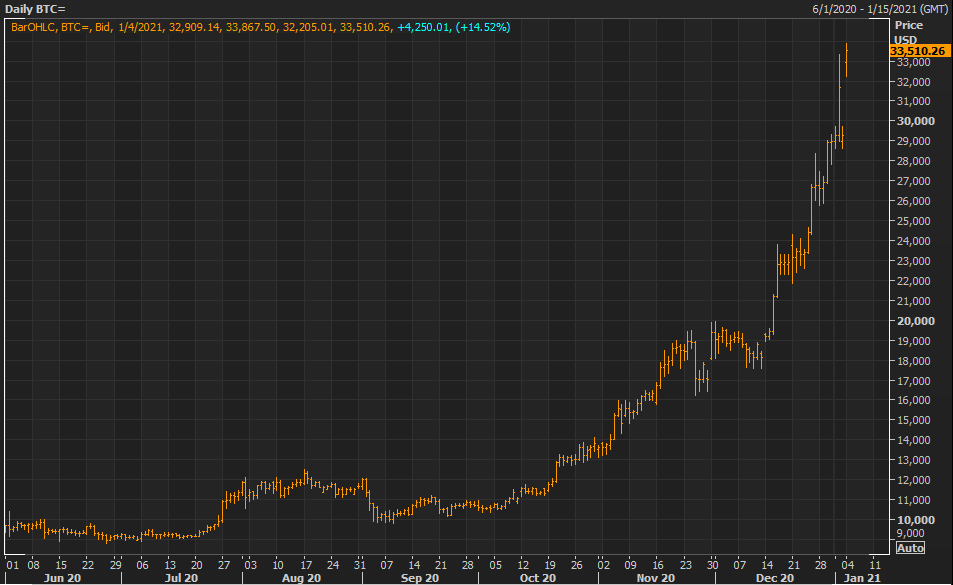 Figure 1 (Source: Refinitiv): Bitcoin Daily : On the back of institutional endorsements and mainstream acceptance, bitcoin edges closer to 35,000