Brexit back in the headlines with the pound sinking 0.9% on a quiet day more or less as the U.S. celebrates Labour Day. Against other majors and gold, the greenback gained slightly. U.K PM Boris Johnson publicly stated on Monday if a withdrawal agreement is not met by Oct. 15th, he’d rather a no-deal Brexit than compromise on conditions seen favourable to the E.U. Markets were reminded of the risk of UK leaving without a deal, especially as the Dec. 31st deadline looms, where the standstill agreement expires.

Elsewhere President Trump ups the ante against Beijing, as he intends to decouple economic relationships between China and the U.S. Tariffs will be imposed on American companies creating jobs in China, as well as forbidding such companies from obtaining federal contracts. 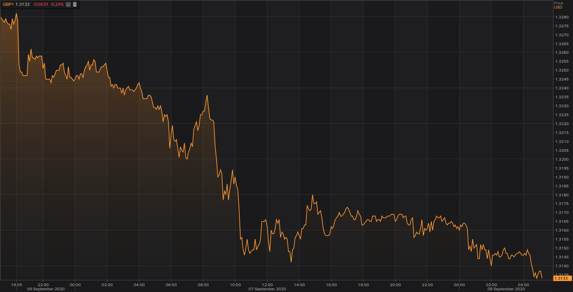 Oil extended losses as Saudi Arabia’s demand concerns continue to reverberate in fuel markets. Major support seen at the 10,000 level in bitcoin as attempts to break down fail.