Tech-rout in Nasdaq leaves no markets unscathed, headlined by Tesla, as the company lost 34% of market cap since the stock split. Nasdaq losing 4% and down four consecutive days. Followed by S&P and Dow posting losses of 2.9% and 2.6% respectively. Brexit negotiations undermined UK and European indices as the deadline looms. U.K. PM Boris Johnson ratcheted up the notion, if a withdrawal agreement with respect to Northern Ireland is not agreed upon by today, he walks. If a no-deal Brexit occurs, at stake is $1tn in trade. As news spread of Masayoshi Son’s $4bn option gambit on U.S. tech through Softbank and the ensuing rout, the company declined 4.81% yesterday, dragging down the Nikkei a moderate 0.8%. Asia set to resume declines felt during U.S session, as Australia, Hong Kong and Japan edges lower on open. 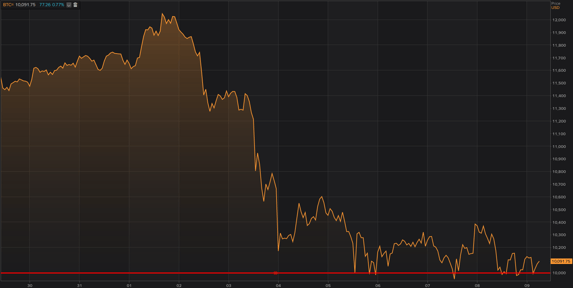 Figure 1 (Source: Refinitiv): Bitcoin intraday - Of interest today, bitcoin finds strong report on the 10,000 level as attempts to breach were met with failure.

Oil keeps tumbling, down over $2 as the price decline resonates weaker global growth prospects. Safe-haven alternatives gold and bitcoin continue to hold above psychological levels $1,900 and $10,000 respectively. The U.S. dollar remained strong as money flow left riskier currencies. More so, the pound, as the currency depreciated 1.2%. The BOE potentially grappling consequences of a no-deal Brexit, would see rate cut expectations moved forward. The Mexican peso also in a tough spot, as the government signal no further fiscal stimulus will be considered, instead the President Lopez Obrador will restructure the budget with an emphasis on social programs.

On the coronavirus front, infection cases now stand at 27.4M with a 3.3% death rate as India overtook Brazil to exhibit the second-highest number of infections in the world. Most recent restrictions implemented is with the U.K banning social gatherings of more than 6 people. Vaccine hopes fizzled as AstraZenaca, one of the frontrunners in last stage of testing and developed by researchers from University of Oxford, announced a halt to trials. Concerns arose over adverse reactions U.K participants displayed from the vaccine.