The Turkish lira remains in the headlines this week and going into the weekend on liquidity concerns after the BDDK’s reversal on trading curbs last Thursday- the same day the currency hit record lows last Thursday. Turkey has been under heavy scrutiny for overbearing market interventions practices and new anti-manipulation rules intended to anchor its currency. 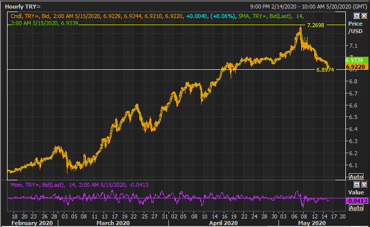 Ever since the Lira currency crisis in 2018, Turkish authorities have made it increasingly difficult for foreign investors to bet against the lira by limiting their access to liquidity. But the clampdown has undermined investor confidence in the country’s adherence to free-market principles and exacerbated capital outflows, Bloomberg reported.

A month ago, the Turkish banking watchdog said it was limiting local banks’ ability to conduct foreign exchange swap, forward and option transactions with foreign entities at just 1% of each lender’s equity, down from 10% previously- the squeeze as intended to boost scarce hard currency reserves but as a Reuters article pointed out last month, there were concerns that “it will not stem the lira’s decline and that the country’s reliance on foreign capital means it could backfire.” Now we see that turkey is burning up its reserves of dollars and euros to prop up the lira, but the coronavirus pandemic is making the policy unsustainable and pushing it towards full-blown crisis, the Wall Street Journal reported.