Mixed result coming out of Wall Street with Nasdaq sharply declining 1%, S&P500 lower by 0.3% whilst Dow Jones ended in positive territory. Speaking at the Economic Club of Washington, Fed Chair Powell indicated the central bank would scale back bond purchases before considering any hawkish endeavour on the policy rate itself.

Public confidence in COVID-19 vaccinations is waning in Europe as Denmark becomes the first country in the bloc to permanently suspend the use of AstraZeneca’s shot with Norway expected to announce their decision on Thursday. Amid Johnson & Johnson pausing their own roll-out, Brussels intends to fast-track delivery 50m doses of BioNTech’s COIVID vaccine in the next three months. Lack of upside scenario’s saw European benchmarks ended their sessions lower across the board.

As bitcoin retraces from $64,800 to $62,300, the first public listing of a major cryptocurrency exchange saw Coinbase Global debut at $75.9bn with an open price of $381. Shares reached as a high as $429.54 before closing Wednesday’s session at $328.28, down $14 from open. Coinbase is considered the largest digital coin exchange in the U.S. encompassing 56m retail customers.

Wall Street shrugged off better than expected inflation figures as another vaccine manufacturer falls victim to recent inoculation concerns. This time arising from Johnson & Johnson’s vaccine as U.S. health authorities find a solid link to blood clotting in extreme circumstances. Nasdaq which prospered under the stay-at-home regime, outperformed shooting up 1.1%. S&P500 followed suit, up 0.3% whilst the Dow Jones ended the session in negative territory.

Despite Johnson & Johnson delaying their planned rollout of its COVID-19 vaccine across Europe, benchmarks rose higher, particularly the French CAC breaking into new ground. Soaring yields of recent that eroded returns have since stabilised allowing inflationary risk to a take backseat.

On the crypto front, bitcoin now has now surpassed $64,000 after gaining $4,000 since yesterday. Investor risk-appetite remains high as Nasdaq sets a reference price of $250 for the direct listing of Coinbase, where trading will start on Wednesday. Unlike most exchanges, Coinbase enforced strict regulatory compliance, allowing the firm to proper within the U.S. 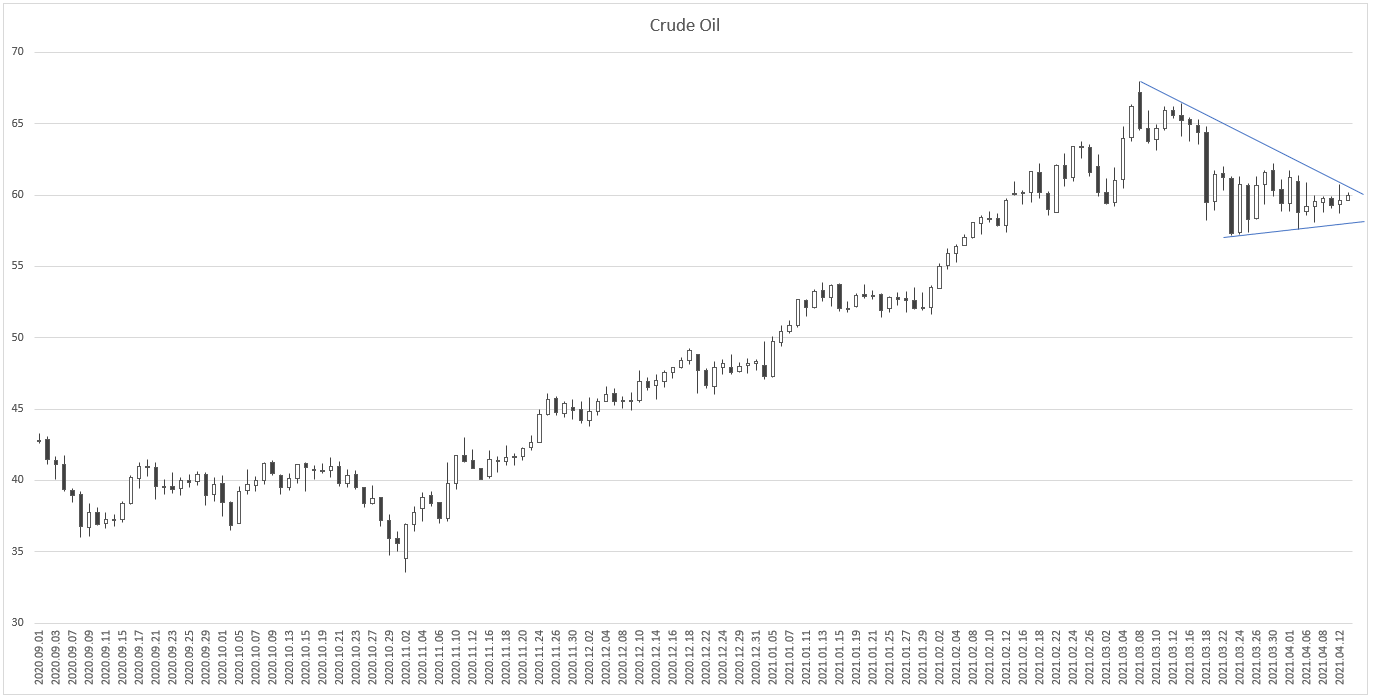 Mixed start to Asia with the Hang Seng surging 1.5% on open as officials outlined phases to curb social distancing measures from as early as April 29th. Eateries, bars, and pubs will be allowed to table up to 12 patrons on the condition that staff and customers are fully vaccinated. Weaker business confidence data forced Australia’s S&P200 lower whilst the Nikkei rallied as much as 1% intraday.

Wall Street held steady on light volumes as investors gear up for corporate earnings season ahead whilst the VIX index, an indicative of future volatility hovered at 13-month lows. Meanwhile, last night’s U.S. 10-year treasury auction was completed without a hitch in demand nor a spike in yields.

Slow distribution and new waves of infections continue to weigh down European markets. Since AstraZeneca’s vaccine efficacy had been called into question on top of the risk of severe side-effects, China’s Sinovac has seemingly become collateral damage with the state media defending the shot following a Chinese senior health expert questioning the jab’s success rate.

The yuan rallied to 6.5472 as speculation swirled that China will not be labelled a currency manipulator in the U.S. semi-annual foreign exchange report due Thursday, curtailing an already elevated geo-political tension. The U.S dollar unchanged against a basket of majors, gold fell $10 to $1,732 and crude fluctuates between $59 - $61.

Bitcoin exuberance continued Monday with the cryptocurrency hitting a high of $61,214 as Coinbase’s IPO propels bullish sentiment forward, evident from Binance coin of Binance exchange soaring 18% in the last 24 hours. 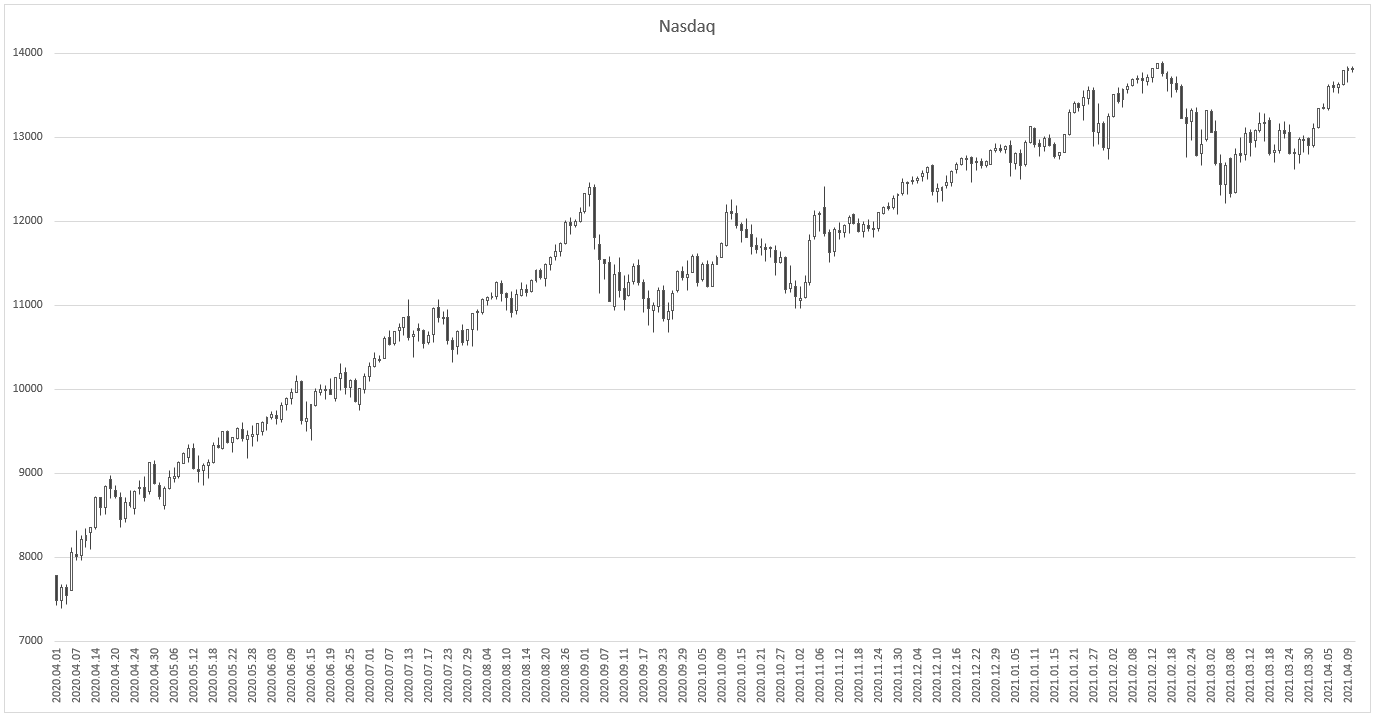 Asia-pacific stocks and overnight futures retreated on open following words of overnight optimism from the Federal Reserve Chairman. In an interview on 60-minutes Powell said the U.S. economy is at an “inflection point” with economic growth and job prospects stronger despite the risk of COVID-19.

China’s record $2.8bn antitrust violation fine on Alibaba Group spooked Hong Kong’s Hang Seng with the benchmark declining 1.4% on open. Previously turning a blind eye, Beijing as of late has stepped up scrutiny on deal-making and anti-competitive practices among technology juggernauts to ensure a chokehold on Chinese tech billionaires empires.

Ahead of reporting season, Wall Street ended Friday with 3 consecutive weeks of advances. A plethora of fiscal and monetary stimulus alongside a successful vaccination program has spurred on positive sentiment. Still, company outlook surrounding President Biden’s corporate tax hike could dent expectations. Elsewhere, the bull run across European markets continued higher despite a lagging vaccination program offsetting growth prospect. In contrast, the FTSE100 ended the session lower even though on Monday non-essential shops and services will welcome back customers as lockdown restrictions ease.

The dollar gained among a basket of majors, crude closed below $60 and gold at $1,743. Bitcoin back below $60,000 after surging to $61,000 over the weekend as investor exuberance gear up for Coinbase’s public listing, currently valued at $100bn pre-IPO. 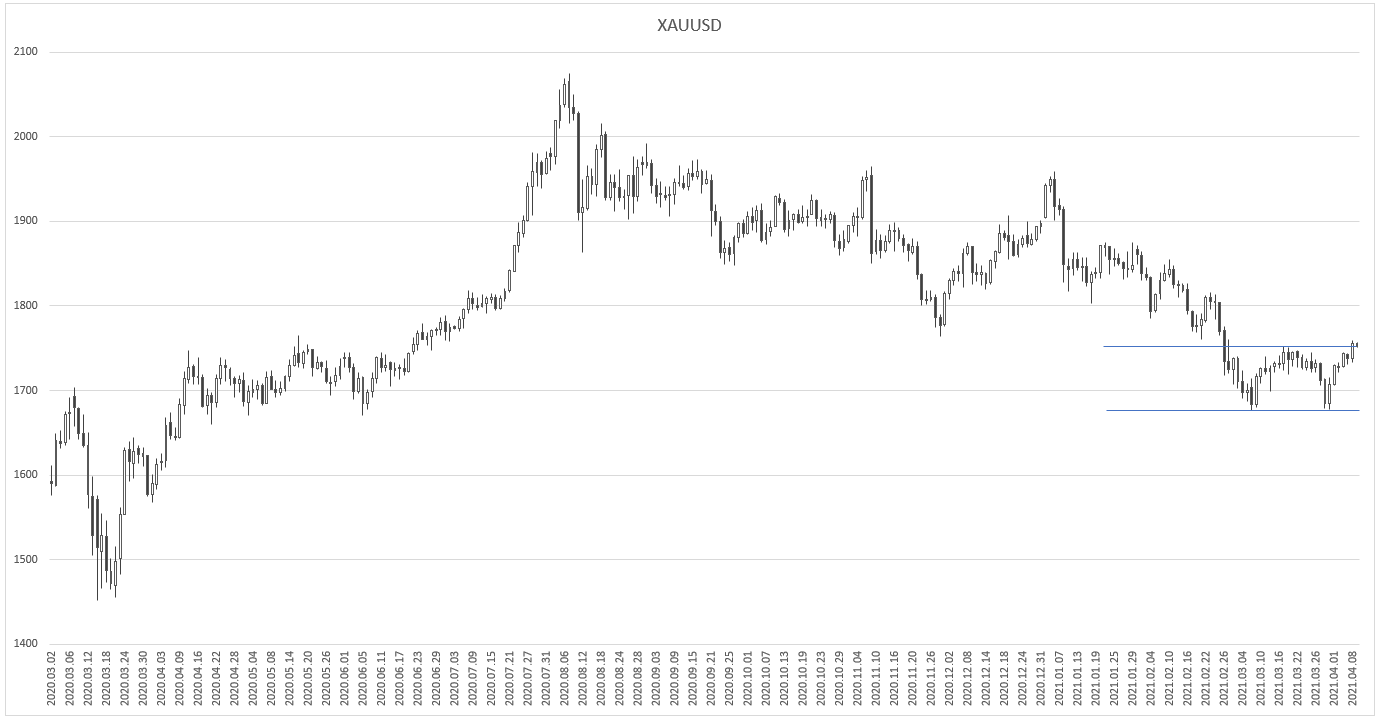 U.S. outlook has greatly improved in the past months with fears of overshooting inflation having subsided following two consecutive weeks of weaker unemployment claims figures and a Federal Reserve Chairman that has continuously reassured a commitment to dovish endeavours. Speaking in a virtual panel on Thursday, Jerome Powell described scenes of a substantial homeless encampment in downtown Washington, that despite improving headline economic figures, many American’s are still unemployed. Wall Street emerged a winner as benchmarks unanimously advanced, particularly the S&P500 recording fresh all-time highs.

Australia’s S&P200 fell on open as the government announced a halt to AstraZeneca’s vaccine for under 50’s following enough evidence proving a linkage between the shot and blood clots. Likewise, the Hang Seng down 1.1% after China’s CPI data overshot market consensus. Prospects of overheating would entail Beijing’s wrath in tightening both fiscal and monetary measures. The Japanese Nikkei bucked the trend, gaining intraday.

Crude oil edged higher to just below $60 after Saudi Arabia stressed though OPEC plans to increase production over the next three months to July, the group remains nimble should economic forecast deviate. With treasury yields stabilizing, the dollar lost ground against majors. Gold breaks above to settle at $1,755 after a technical double bottom and bitcoin back above $58,000 after following State Street cements a deal to lend its tech to a cryptocurrency trading venue.

Wall Street poised to benefit from a two-prong support between fiscal and monetary stimulus as the S&P500 and Nasdaq continues to edge higher. In a White House speech on Wednesday, President Biden promoted his $2.25tn infrastructure plan as a counter against China’s increasing dominance on the global table with resistance from Republicans over planned tax hikes. Meanwhile FOMC meeting minutes reveal in the face of upgraded growth and employment projections, the central bank will remain dovish until in 2023, keeping the $120bn asset purchase program per month unchanged.

Following reviews by the U.K. and E.U. health regulators, a link between AstraZeneca’s vaccine and blood clots has now been formally determined. Findings complicate an already underwhelming vaccination program, as the most likely response would be to suspend the shot, slowing down schedules even more. News weighed by European benchmarks as many remained unchanged. In contrast, Brits are gearing up for life after lockdown with the FTSE100 gaining 1.1%.

Whilst the S&P200 and Hang Seng rallied on Asia open, the Nikkei slipped as Osaka declared a state of emergency yesterday after daily infections hit a high of 878. The services industry in Japan continue to take the brunt of COVID-19.

The U.S. dollar gained across the board as elevated treasury yields remain a juicy prospect. Crude finds support at $59, gold closes at $1,737 and bitcoin falls $2,000 to $56,000 following concerns that China could use the cryptocurrency to undermine the U.S. The theory depicts China’s preference for two global reserve currencies as opposed to just the American greenback. China’s attempt to raise the yuan into that role has thus far failed, however the global acceptance of bitcoin may fill that role.

Weak start to Asia session with most benchmarks slipping on open. Though Australia’s S&P200 gapped up 1% following Easter break, the index has retreated half a percentage point thus far during intra-day trading. Nonetheless, as the Australia government announces a travel corridor with New Zealand, the tourism industry is one step closer towards their long-awaited recovery.

The U.S. dollar slumped against majors as Janet Yellen’s swatted away concerns for inflation and reassured investors yields will continue to remain low in the medium term. Meanwhile, crude declines $2.50 to just below $59 on the prospect of greater global supply from Iran once U.S. eases sanctions. Gold’s currently at $1,735 and bitcoin below $59,000.

To the east, China’s central bank sound warning bells as it urges lender to rein in credit supply by keeping new loans in the 1st quarter at or below the same level as last year. Guidelines were introduced by PBOC in the face of a 16% growth in new-loans, risking overheating the economy.

Lockdown fatigue becomes more prevalent across Europe as the bloc faces a resurgence in COVID-19 infections, a rising death toll and a disappointing vaccination roll-out.

Barring Japan, Australia and Hong Kong markets are shut for Easter holidays. The Nikkei climbed over 200 index points intra-day after Q1 business sentiment rebounded in spite of the state of emergency during the period.

The dollar index weakened, however of particular interest is the Turkish Lira. The currency surged 1.7% after the newly appointed central bank Governor Sahap Kavcioglu reassured investors to keep a hawkish stance on monetary policy to stem inflation risk. Gold rose $22 to $1,730 and bitcoin at $59,500.

Bucking consensus, OPEC has agreed to gradually increase oil production by 2 million bpd from May to June. Pre-meeting, expectations was that member states and allies remain cautious, however post meeting notes revealed growing confidence in the current global recovery. Saudi’s Energy Minister said “Even in those sectors that were badly hit such as airline travel, there are signs of meaningful improvement”.

Most European indices ended Wednesday’s session flat with investor sentiment weighed down by prevailing slow vaccine rollout and inconsistent policies. French CAC an outlier, closing in the red following President Emmanuel Macron announcing an extension to lockdown measures for four weeks ahead of Easter holiday. Though, on a positive note, both Pfizer and BioNtech released statistics suggesting their vaccines have a 100% efficacy rate for adolescents between age 12 – 15.

Coming into Asia, benchmarks cautiously drift upwards. Over 50 Hong Kong listed companies had their trading suspended as they either failed to report annual results or failed to provide sufficient filings by 31st March. Compare to last where only 9 companies were hit with trading halts.

The dollar index retreats slightly, gold rebounds back to $1,707 alongside bitcoin of which is teetering below $60,000.